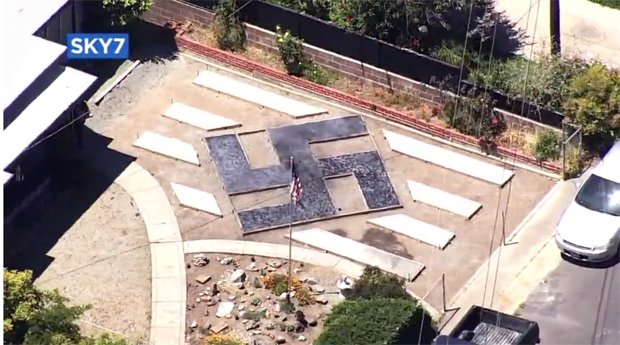 Las Vegas, June 13th, 2019 – "Proswastika supports the artistic display of the swastika symbol at the private property of Steve Johnson in El Sobrante, California, despite the criticism he is confronted with from his neighbors and the media," said Upendra Singh, Nepalese American, Raelian Guide and spokesperson of the Proswastika movement.

During his recent interview with ABC7 News, Johnson pointed out that the swastika was not a Nazi symbol. “It’s a Tibetan sign that’s way back before swastikas were invented... I like those signs. I think they look cool. I like them," Johnson said.

While his neighbors and media have criticized him for the massive display of the symbol, Proswastika fully supports him for his appreciation of this beautiful symbol—its meaning being all about peace and love.

"It is important to remember that for thousands of years—before the Nazi era—the swastika stood only for peace and love until it was unjustly maligned and misappropriated by Hitler," explained Singh.

"By discriminating against it, these neighbors are doing exactly what the Nazis used to do, rejecting minorities for their differences and beliefs," Singh expressed.

Singh explained that California has the highest Native American population in the United States and Native Americans have been using the swastika symbol as a symbol of friendship long before the Nazis.

"Looking at the swastika as a hateful symbol is an act of discrimination towards Native Americans,” he added.

According to Singh, the time has come to fully rehabilitate this symbol of peace and well being because it predates Nazism and was unfortunately hijacked by the Nazis for only a few years.

“Today, it is found on every continent and has been associated with beauty and peace for millennia," he concluded.