6th annual Swastika Rehabilitation Day to be celebrated on July 11 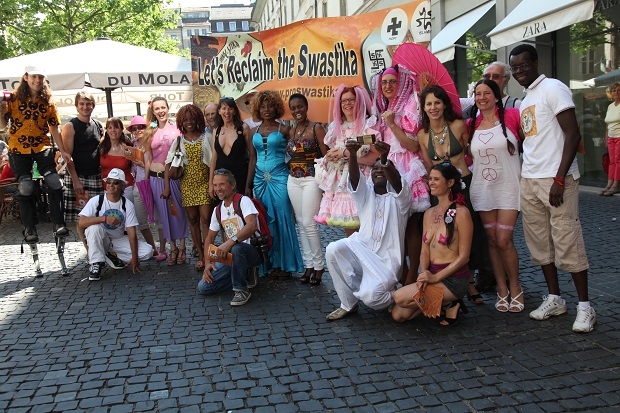 LAS VEGAS, July 9 – Raelians and others who revere a non-Nazi-related swastika as a religious symbol will celebrate the 6th annual Swastika Rehabilitation Day on July 11 in cities around the world, according to a statement released today by the ProSwastika Alliance. The organization, which has tax-exempt 501c3 status under the U.S. tax code, seeks to rehabilitate the swastika by restoring its original, positive meaning.

“We’ll be flying banners featuring swastikas in several cities around the United States, including New York, and for the first time this year, Chicago,” said Raelian Guide Thomas Kaenzig, who is president of the ProSwastika Alliance.

“Due to educational and informative efforts by our alliance and others, the swastika’s ancient, worldwide meaning of peace and harmony is slowly replacing its unsavory association with the Nazi thugs who tarnished it,” Kaenzig said. “We see it being more and more accepted in the West. In fact, a 2015 Super Bowl Jeep ad included a swastika in a scene that was shot in Shanghai.”

But a lot of educational work still lies ahead, according to Kaenzig.

“The CVS chain laid off a Raelian earlier this year for wearing earrings that depict our Raelian symbol, which contains a swastika,” he said. “It was clearly religious discrimination because Raelianism is an officially recognized religion in the United States and he was dismissed specifically for wearing our symbol. Would CVS have fired a Christian for wearing a cross? Of course not!”

He noted that, for billions of people worldwide, including Hindus, Buddhists, Jains and many Native Americans, the swastika is a revered, ancient symbol that has been used continuously for millennia.

“The swastika is found in cultures around the world from the very earliest times,” Kaenzig explained. “In the United States, you can see it in a New Orleans synagogue, and in lots of pre-Nazi-era monuments and historical sites. That’s because, until the 20th century, the swastika had nothing to do with Hitler, who used it for evil purposes,” Kaenzig said. “And remember, lots of bad things were done in the name of the cross. Think of the Ku Klux Klan! But the cross is still a revered religious symbol for countless people worldwide. So is the swastika, and it’s time for that to be acknowledged in the West!”
Tweet